the talk of the town

I saw the below paragraph, from The New Yorker, online earlier this week. I don't remember where. And now, I've just been reading the hard-copy at my dining room table. The notion 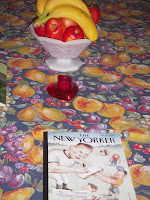 expressed cannot be repeated too many times - not at this early stage of President Obama's term. First, so you know, here is The New Yorker online, but there is not where I first read the paragraph:

Fifty years ago, the civil-rights movement understood that nonviolence can be an effective weapon even if--or especially if--the other side refuses to follow suit. Obama has a similarly tough-minded understanding of the political uses of bipartisanship, which, even if it fails as a tactic for compromise, can succeed as a total strategy: once the other side makes itself appear intransigently, destructively partisan, the game is half won. Obama is learning to throw the ball harder. But it's not Rovian hardball he's playing. More like Gandhian hardball.

The commentary is signed by Hendrik Hertzberg. It appears that Mr. Hertzberg also has a blog.