My youngest grandson loaned me a book to read that he has read about three times now. I've now read it once. The book is The Absolutely True Diary of a Part-Time Indian by Sherman Alexie.

Sherman Alexie, a Spokane/Coeur d'Alene Indian, was born in 1966 on the Spokane Indian Reservation in Wellpinit, Washington. He received his B.A. in American studies from Washington State University in Pullman. 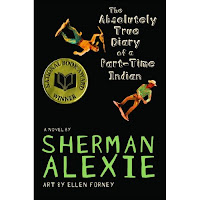 He is also the author of several novels and collections of short fiction including Flight (Grove Press, 2007); Ten Little Indians (2003); The Toughest Indian in the World (2000); Indian Killer (1996); Reservation Blues (1994), which won the Before Columbus Foundation's American Book Award; and The Lone Ranger and Tonto Fistfight in Heaven (1993), which received a Hemingway Foundation/PEN Award.

Among his other honors and awards are poetry fellowships from the Washington State Arts Commission and the National Endowment for the Arts and a Lila Wallace-Reader's Digest Writers' Award.

Alexie and Chris Eyre wrote the screenplay for the movie Smoke Signals, which was based on Alexie's short story "This is What it Means to Say Phoenix, Arizona." The movie won two awards at the Sundance Film Festival in 1998 and was released internationally by Miramax Films. He is also a three-time world heavyweight poetry slam champion. Alexie lives with his wife and son in Seattle, Washington.

This is now one of my favorite books. It is a "coming of age" book (coming of age is another way to say "growing up"). It is the story of an Indian boy born on a Northwest Indian reservation (called derisively "the rez") who decides to leave the reservation each day to attend a school in town instead of remaining at the reservation school. The boy, Arnold Spirit, is born with water on the brain, a fragile brain-damaged Indian child not expected to live long. Part of the joy of this semi-autobiographical book is that we know he does live, and now, because Sherman Alexie wrote this book, he will live forever (forever is another way of saying for as long as we will be able to remember).

Arnold's decision to attend school in town is a costly one for him because it causes a rift with his best friend; a rift that actually includes almost the entire population of the reservation except for his immediate family. It is a courageous journey into another world. One of the first of the white kids who befriends Arnold (or at least tolerates him) is Gordie, "the Genius White Boy." One of their early conversations is an especial jewel within the story. Gordie tells him:

"You have to read a book three times before you know it. The first time you read it for the story. The plot. The movement from scene to scene that gives the book its momentum, its rhythm. It's like riding a raft down a river. You're just paying attention to the currents. Do you understand that?"

"Yes, that's what it is, but who invented the word, who first used it, and how has the meaning of the word changed since it was first used?"

"Well, you have to look all that up. If you don't treat each word that seriously then you're not treating the novel seriously."

As I said, my grandson has read the book three times; I've read it once. I have the plot down okay, but I'm still a little short on some of the history.

Arnold's family is dirt poor and struggles with a variety of issues that lots of other families also know about. He is faced over and over with hurdles to surmount that would slow a less determined boy; Arnold is no quitter. But even he is finally faced with such overwhelming loss, that it is all he can do to continue walking forward one step at a time. This book is a blessing and if you know young man (of any age over, say 13 years old or so, this is probably a book for him - it was certainly a book for me).

This is also a book that you will not find in some libraries probably. It does not shy from the realities of life and like other great books for young men (Huckleberry Finn comes to mind), it is probably banned from the shelves in some communities. It is worth a search.