Time to celebrate the bicentennial of President Lincoln's birth. His birthday is tomorrow.

I'm not sure when it will start, but in 2009, the United States Mint will mint and issue four different 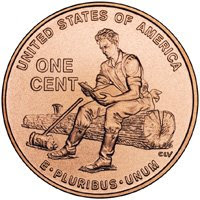 one-cent coins in recognition of the bicentennial of President Abraham Lincoln's birth and the 100th anniversary of the first issuance of the Lincoln cent.

The reverse designs were unveiled September 22 at a ceremony held at the Lincoln Memorial on the National Mall in Washington, D.C. While the obverse (heads) will continue to bear the familiar likeness of President Lincoln currently on the one-cent coin, the reverse will reflect four different designs, each one representing a different aspect, or theme, of the life of President Lincoln.

The U.S. Treasury has a history of the Lincoln cent that is instructive and fun to read.

Seems some of the banks may want to return Uncle Sam's bailout pennies . . . could they be worried about scrutiny of executive pay?

Wall Street banks have taken billions of taxpayer dollars. Now some of them are starting to wonder if they should give the money back.

Seems they think the rules that come with the money may be unfair.
- Bill Boydstun at 4:20 AM