Paul Ryan a Deficit Hawk? Give me a break!

Wikipedia defines "deficit hawk" as someone who places great emphasis on keeping the federal deficit in check:

Deficit hawks are fiscal conservatives who believe the best way to reduce the deficit, pay off national debt, and balance the budget is by increasing taxes in addition to cutting government spending. George Voinovich of Ohio was perhaps the most recent best-known deficit hawk in the United States Senate, as were Warren Rudman of New Hampshire, Phil Gramm of Texas and Fritz Hollings of South Carolina and Bob Dole of Kansas during their years in the Senate. The Peterson Foundation is a prominent advocate of this position. The Concord Coalition is a bipartisan political advocacy group made up of deficit hawks and is perhaps the largest and most influential political advocacy group dedicated to promoting a balanced budget.

So, if you buy that definition (and the examples) as at least near the mark, is Paul Ryan a deficit hawk as the media states over and over ad nauseum? Give me a break!

This guy Paul Ryan, this Ayn Rand acolyte, is not a deficit hawk by any stretch of the definition - but just because his Republican friends are loudly proclaiming him a savvy deficit hawk does not mean that the bulk of the media should follow suit. Give me a break!

Don't you believe it!
- Bill Boydstun at 2:41 PM No comments: Links to this post

It is a Republican Mess

I mostly try to stick to topics like gardening, family, poetry, dogs and cats and ignore the sour winds of politics but the idiocy (long rampant) is getting more and more ridiculous.
Secretary Timothy F. Geithner met with House Democratic and Republican freshmen who have expressed doubt that there is a risk in not raising the debt limit even as Moody's Investor Service was issuing a stern warning of consequences.

According to the New York Times, one of the Republicans evidently told Secretary Geithner, "We didn't create this mess."

The Times story included its own rather mild assessment:

Independent analyses have shown that more than half of the $14.3 trillion debt is from policies enacted during the past decade when Republicans controlled both the White House and Congress, and much of the rest from lost revenues and stimulus spending and tax cuts since Mr. Obama took office at the height of the financial crisis and recession.

Okay, this needs to be hammered! Let's do the simple and stark analysis here: "over half" of the debt is from Repub policies and "much of the rest from lost revenues and stimulus spending and tax cuts since Mr. Obama took office." Those lost revenues and tax cuts are leftover detritus the Bush administration and the stimulus spending (some started under Bush) are virtually all that has kept the economy from a complete tank. This needs to be repeated and repeated these Republicans who are now yelling for cuts, cuts, cuts (but not cuts in war costs) are creators of this mess and their tax cuts for the rich are a big part of it.
- Bill Boydstun at 7:37 AM No comments: Links to this post

Separating "the human beings and the asses"

Digby's take on Sarah Palin's stand against the Dream Act.

According to Wikipedia, the Dream Act

would provide conditional permanent residency to certain illegal and deportable alien students who graduate from US high schools, who are of good moral character, arrived in the U.S. legally or illegally as minors, and have been in the country continuously for at least five years prior to the bill's enactment. If they were to complete two years in the military or two years at a four year institution of higher learning, the students would obtain temporary residency for a six year period. Within the six year period, a qualified student must have "acquired a degree from an institution of higher education in the United States or [have] completed at least 2 years, in good standing, in a program for a bachelor's degree or higher degree in the United States," or have "served in the armed services for at least 2 years and, if discharged, [have] received an honorable discharge." Military enlistment contracts require an eight year commitment, with active duty commitments typically between four and six years, but as low as two years. "Any alien whose permanent resident status is terminated [according to the terms of the Act] shall return to the immigration status the alien had immediately prior to receiving conditional permanent resident status under this Act."

In a December 2010 report, the Congressional Budget Office and the Joint Committee on Taxation estimated that the November 30th, 2010 version of the dream act would "reduce deficits by about $1.4 billion over the 2011-2020 period and increase government revenues by $2.3 billion over the next 10 years." Moreover, a recent UCLA study estimates that between $1.4 trillion and $3.6 trillion in taxable income would be generated for the economy over a 40 year period based upon estimates ranging between 825,000 and 2.1 million potential DREAM Act beneficiaries successfully obtaining legal status through the legislation.

- Bill Boydstun at 8:38 AM No comments: Links to this post 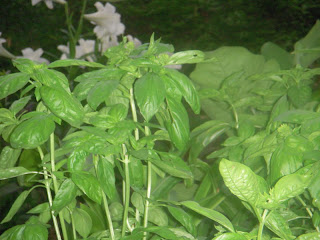 I guess I'll make a batch of pasta sauce this coming weekend - I like very basil-ly tomato sauce. Maybe some pesto as well, but we've recently been partial to cilantro pesto though it's mostly too hot in Houston to grow cilantro except mid-winter. Cilantro pesto! and A. recently made a mint pesto (included some parsley) which was very complex tasting - just delicious.

But this weekend will be red sauce with loads of basil (and mushrooms).
- Bill Boydstun at 6:58 AM No comments: Links to this post