- Bill Boydstun at 8:50 PM No comments: Links to this post

I know everyone has seen this . . . I'm just posting it because of all the dumb-ass negativity flowing through the air . . . the potus is cool!

- Bill Boydstun at 6:31 PM No comments: Links to this post

Our Asian Jasmine is in bloom . . . this is a first for us in all the years we've grown this ground cover. 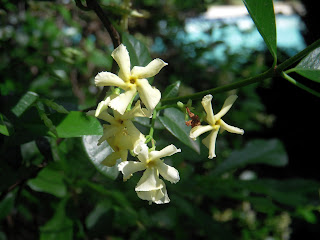 Of course, it's left the ground to soar above and that's why it wafts that sweet jasmine aroma throughout the backyard.

- Bill Boydstun at 5:34 PM No comments: Links to this post

I've long thought - actually more than that, I've started once or twice - a notebook of lists as a way to a shorthand biography so that my kids (who have expressed little interest) and grand-kids would have some notion of the facets of the old man who lived and one day died that they called dad and grandpop . . . A mostly doesn't need such a list, she knows enough. But I digress slightly . . . Walter Matthau would be on my list of 10 all-time actors. The idea of the lists is to list to 10 things (any and everything) that gain momentum in my life and give me pleasure (which includes learning, smiling, understanding finally, etc.). 10 is not absolute. Some of the lists would longer; some lists would be shorter (my number of pets, sisters, cities lived in are all controlled by something outside of my fanciful musings. Mentioning cities makes me state, without much equivocation, that my birth city, San Francisco, is #1 on my list of cities - among other things, it is where I saw and worshiped the performances of Andrés Segovia and of Julian Bream (and it is across the Bay from the lovely Berkeley where I first met and wed A (actually the wedding happened in Reno, but that is beside the point really). But I digress (my whole life is a sort of digression - I had early plans that I haven't fully returned to yet). My favorite digresser (as I use the word) may have been Aliana - I haven't yet started a list of digressing champions. But back to Walter Matthau. He would be on my list of 10 all-time actors. If this list is about my favorites, he's gotta be on it; if this list is about accomplished, he's gotta be on it. A. and I just watched The Taking of Pelham 123 starring Walter and knew as we watched that we had seen the movie before but continued watching it because we were enjoying it. Turns out that we probably (as you gain birthday candles, always equivocate a little when you're claiming something about your memory) have not seen it before - we probably only saw the remake - which was a good movie. And, anyway, this is not a list of my 10 movies (neither of these would make the cut). Still, it was a nice watch for a Saturday afternoon lunch as an interruption to our early day working slog . . . and Walter Matthau is definitely on my list.
- Bill Boydstun at 5:05 PM No comments: Links to this post

President Obama has proclaimed Fort Ord a National Monument. That's cool. Fort Ord was my Basic Training home. I hiked some of those trails, not really carefree and enjoying the native fauna, but more double-time hup two three double-time with a backpack full of weight. Glory days (in a way). No, not really. Not glory days. But still, days that cause a smile or two of pride in punching it through.

WASHINGTON — The White House on Friday announced the creation of the Fort Ord National Monument, a stretch of grassland, oak and shrub landscape on California’s Central Coast where 1.5 million American soldiers trained before heading off to war.

President Barack Obama used his power under the 1906 Antiquities Act to set aside the federal land off the Pacific Ocean for wildlife habitat and for the pleasure of people who explore its 86 miles of rolling trails on foot, mountain bike and horseback.

“Fort Ord’s dramatic landscape lives in the memories of thousands of veterans as their first taste of Army life, as a final stop before deploying to war, or as a home base during their military career. This national monument will not only protect one of the crown jewels of California’s coast, but will also honor the heroism and dedication of men and women who served our nation and fought in the major conflicts of the 20th century,” Obama said in a statement.

Fort Ord, near Monterey Bay, about 80 miles south of San Francisco, was a major Army training center during the Vietnam War. It became a base in 1917 and was closed in 1994. The Bureau of Land Management soon opened its more than 14,000 acres for recreation, and more than 100,000 people have used it annually.

“That national monument designation, it really is a national and international brand in its own right. It really will enhance tourism here,” said Dennis Donohue, mayor of nearby Salinas, Calif. He said that the beauty of the land in the area is “really part and parcel to our quality of life and our economic vitality as a region.”

Interior Secretary Ken Salazar said the national monument designation — the second Obama has made _ was part of the administration’s strategy of asking communities about land that should be protected and taking action in places where there is strong local and bipartisan support.

- Bill Boydstun at 5:30 PM No comments: Links to this post

David Kolb writing in the The Muskegeon Chronicle gets it right.

Ex-President George W. Bush last week tried to wish away the problematical taint of his name on those ruinous tax cuts passed by virtually every single Republican in Congress back in the early days of his awful reign. I’ll go Dubya one better, wishing the accurately named Bush tax cuts had never been enacted into law.

In fact, we should all wish we had never heard of the blasted things -- nor voted for any of the pre-tea party dunderheads who passed them, with all their negative weight, onto the stooped shoulders of an America that couldn’t afford them.

Just this single piece of Bush’s GOP agenda pushed through in the first term of his presidency -- his tax cuts, enacted in 2001 and 2003 -- have added more dollars to the nation’s debt and deficit than almost all of the rest of his horrible policy initiatives combined.

- Bill Boydstun at 6:17 AM No comments: Links to this post

Living is more than being alive. Among the list of healthful activities must certainly be walking and Slate walks us through a series worth the sedantry reading time they take.

Pedestrian is a word born from opposition to other modes of travel; the Latin pedester, on foot, gained currency by its semantic tension with equester, on horse. But there is an implied—indeed, synonymous—pejorative. This dates from Ancient Greece. As the Oxford English Dictionary notes, the Greek πεζός meant “prosaic, plain, commonplace, uninspired (sometimes contrasted with the winged flight of Pegasus).” Or, in the Latin, pedester could refer to foot soldiers (e.g, peons), “rather than cavalry.”

In other words, not to be on a horse, flying or otherwise, was to be utterly unremarkable and mundane. To this day, Ronkin was intimating, the word pedestrian bears not only that slightly alien whiff, but the scars of condescension. This became clear as we walked later that evening through the historic center of Savannah. As we moved through the squares, our rambling trajectory matched by our expansive conversation, we were simply people doing that most human of things, walking. But every once in a while, we would encounter a busy thoroughfare, and we became pedestrians. We lurked under ridiculously large retroreflective signs, built not at our scale, but to be seen by those moving at a distance and at speed. Other signs reinforced the message, starkly announcing: “Stop for Pedestrians.” I thought, “Wait, who’s a pedestrian? Is that me?”

Maybe it should be all of us . . . but there are clearly location choices off the beat of modern traffic intersections.
- Bill Boydstun at 8:09 AM No comments: Links to this post

Email ThisBlogThis!Share to TwitterShare to FacebookShare to Pinterest
Labels: Slate