The A Lady and I lived in Berkeley and North Oakland during the time Madden coached the Raiders. He was in his thirties, a young man on a mission. His .759 winning percentage during the regular season ranks highest among coaches with 100 career victories. During his tenure, the Raiders were a Team to Behold. The sideline at Raider's games was as entertaining, and sometimes as complex, as any opera. Like Verdi's Rigoletto the Raider sideline, with Madden holding forth center stage, was a mixture of comedy and tragedy, a masterpiece of apparently heterogeneous elements. So, I appreciated Coach Madden. But Lo, the advent of John the Broadcaster was of almost biblical proportion. Mostly a truth-teller, certainly an adept ad-libber, and an expert on the game of American football, he was the consummate color commentator along side his broadcast sidekick Pat Summerall. In my mind, only Don Meredith, comes close (as a very distant 2nd) to Coach Madden's everyman take of football, philosophically acute, without being cute, he seemed to never be bored with explaining the x's and o's. Watching football will not be as much fun.

Sorry to wax eulogistic, he continues very much alive. But I sure enjoyed his standing front and center for a time. Best wishes, John!

John Madden to Ride into the Sunset:
After serving for 123 years in different capacities with NFL, John Madden has already decided to retire from his broadcasting duties. Now, he has to say goodbye to the job where his enthusiastic and down-to-earth style made him one of the most renowned broadcasters in the field of sports for three decades. 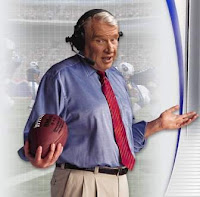 John Earl Madden, who was born on April 10, 1936, is a former American football player in the National Football League, a former Professional Football Head coach with the Oakland Raiders, a football video game magnate and a color commentator for NFL telecasts. He began his pro football career as a linebacker coach at Oakland in 1967 and was named head coach two years later, at 33 the youngest coach in what was then the American Football League. Madden also led the Raiders to their first Super Bowl victory and retired in 1979. He was inducted into the Pro Football Hall of Fame in recognition of his coaching career in the year 2006.


Cross posted from patter pensée.
- Bill Boydstun at 4:43 AM